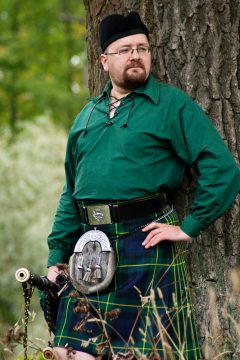 «Pipes & Drums of St. Petersburg» is a band with its own remarkable history and creative background. The main historical landmarks are outlined below in the extracts from the interview with the band Pipe Major Vladimir Molodtsov.

How did you come to find yourself interested in playing bagpipes?

It all started with medieval music, which appealed to me in general and for playing that I had to master several musical instruments. Bagpipes being one of them provoked even deeper interest to know them better.

But as far as it is known, there are quite many different types of bagpipes. From which one exactly did you start mastering this instrument?

My very first bagpipes was Galician Gaita, which in general is very good for playing medieval music and despite its Spanish origin, can also be used for Celtic music from Ireland, Scotland and Brittany.

When and how did the idea to create a pipe band come to you?

In 1997 I gathered my friends and pupils who by then had also obtained Spanish Gaitas, as a result of which the first project of my future band was launched. Also back then it received the name «Onkelskronkel». In 1.5 years another musician joined us, and by then we had also acquired a drummer. As a result, in 1999 the second cast of my band was formed comprising three gaiteros and one drummer. The last concert of that band took place in autumn of 2000 and after that in view of certain reasons I decided to discontinue its existence.

«Pipes & Drums of St. Petersburg» play the Scottish Bagpipes. What exactly has initiated such a transfer from Gaita to the Great Highland?

In 2000 I received the Great Highland Bagpipes as a present from my good friends in Scotland. Shortly thereafter my first pupils interested in mastering this instrument had appeared. One of them was Sasha Parshikov, with whom we started planning our new band. He had invited the drummer Pavel Nikanorov and a bit later the piper Philipp Shek joined us. Thus the new band again consisted of four members comprising three pipers and one drummer. Unfortunately, that band existed only for a few months, from January until May 2004. At the end of May 2004 the piper Sasha Parshikov unexpectedly died literally in front of us. With his death the band ceased to exist.

So when was the current pipe band formed?

In 2005 I had a new pupil Dima Kosyak, who started learning to play Gaita but as I later came to know he always wanted to learn on the Great Highland Bagpipes. So Dima ordered an instrument and in the meantime we started learning the basics. In autumn of 2006 Dima received his pipes from Scotland and we switched to mastering full instrument. As by that time there were just two of us as pipers, the question was in finding a drummer. At first we were inviting guest drummers but their musical concept more oriented towards Irish folk did not match the Scottish drumming technique so important to support the pipe tunes rhythm and the overall band performance style.

While we were looking for a drummer, another piper Dima Selivanov joined us.

On March 24, 2007 the first practice session of the new band took place. There were five of us there: myself (Vladimir Molodtsov), Dima Kosyak and Dima Selivanov making piping section, whilst our drumming section comprised Gleb Logvinov (snare drummer) and Pavel Vlasov, to whom I offered the post of bass drummer. In fact those five people created the backbone of the current band.

In the course of time more musicians from other pupils started joining us. For example, the new snare drummer Ivan Gladiboroda appeared unexpectedly but just in time.

In 2008 Gleb went on a performance tour to Denmark, whilst at the same time we had quite a few gigs so could not be left without a side-drummer. So Gleb suggested his pupil Ivan to substitute him in his absence, and Ivan had been with us ever since.

In 2009 Nickolay Kaskevich joined us, having immediately reacted to our announcement posted on the web. As of now we have nine musicians in our band, five pipers and four drummers. Pending on the band list are two more pipers, who may join us whenever they can. Those are Zhenya Terentyev who is now studying in Moscow and the previously mentioned Dima Kosyak with whom we started the band. He has recently moved to London and became a member of Scottish Piping Society there, and currently plays with the British Airways Pipe Band.

And finally how would you like to see the future of the band?

I would like the band to grow and develop. And it would also be splendid to take part in more of the various musical festivals. 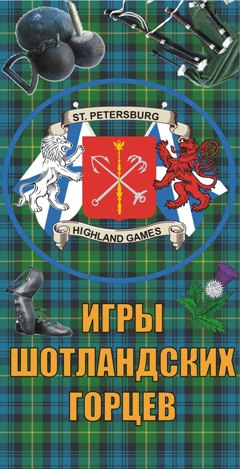